Healthcare is one of the most innovative and unpredictable industries in the world. The health sector has seen drastic change: It was just 175 years ago when doctors first began washing their hands (yuck!) Now look at healthcare today: we use telemedicine to talk to doctors from our homes and can 3D print prosthesis.

So what’s the latest shiny-new technology coming down the pipeline? For the past few decades, Voice Technology has been changing the way we look at products and healthcare services. Today we’ll be discussing the increased accessibility and newest advancements for Voice Technology in Healthcare.

Voice technology has exponentially changed over the past 60 years. IBM developed the first speech recognition device in 1961. This device, called The Shoebox, could only recognize 16 words and numbers. The first consumer-facing voice technology called Dragon Dictate was released around 30 years later; the software, however, cost about $6,000.

Voice technology as we know it today began around 2011, when IBM Watson won Jeopardy and Apple introduced their voice-assistant known as Siri. This started the ball rolling. In the years following Google, Microsoft, and Amazon would all release their respective voice assistants. Now, consumers had voice technology in the palm of their hands.

But that’s not where the train stopped. In terms of consumer-facing healthcare, Amazon has announced that they now have a HIPPA compliant Alexa service, which includes six new healthcare ‘skills’. For day-to-day things, now our headphones, cars, and even homes have the capability to recognize our voices. Just 60 years ago, voice technology seemed a thing of the future. It sure seems like that future is now.

Since users interact with voice technology on a daily basis, it’s no surprise that there are services that help developers integrate these services into mobile apps. Amazon and Microsoft now have resources to easily incorporate voice technology into your next project.

AWS has Amazon Polly: a system that turns text into conversational speech. This allows developers to build apps that actually talk to users, creating an entirely new category of speech-enabled products. Polly is able to generate speech in 29 different languages in either an informational or conversational tone.

Microsoft’s Speech to Text doesn’t have a fancy name, but it doesn’t have a lot of cool features. This service allows developers to integrate transcription possibilities into their products. Speech to Text can recognize over 85 languages and allows for customizable terminology. You’ll be able to transcribe wherever about whatever your company needs.

Examples of Voice Technology in Healthcare 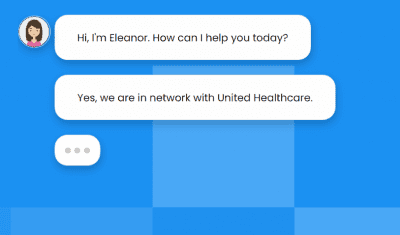 Most healthcare offices have people on staff that handle all the administrative clients needs. As you can imagine, these tasks can be repetitive and tedious, keeping a clinic’s staff away from high-value work. ‘Busy work’ such as this can lead to increased burnout and turnover, eventually causing patient frustration.

Artificial intelligence isn’t new in the healthcare sector; it’s been improving patient care and treatment for several decades. However, there are other places it can be used in a clinic. Operations and tedious tasks could be handled with AI as well. Artificial Intelligence could work together with voice technology to help clinics work smarter, not harder.

One product that’s utilizing both of these aspects is Merit.ai – an artificial intelligence powered virtual assistant for medical practice automation. The system, named Eleanor, can automate administrative tasks and operational workflows, improving patient and staff satisfaction.

Eleanor can be reached via phone call, text, Facebook, or your website. Her conversations are personalized for each patient, and follow a SmartMedMap: a mapping system that’s backed by standardized vocabulary and sophisticated AI technology. Eleanor is bilingual, HIPPA compliant, and is available 24/7. 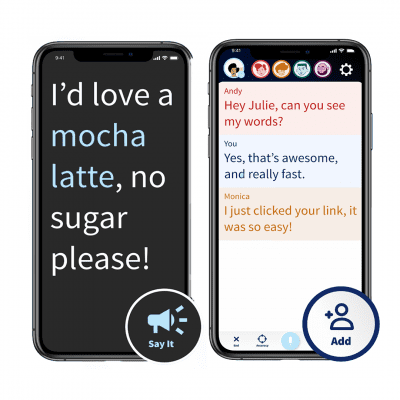 What is it like to be hard-of-hearing in the modern world? Those that are hearing-impaired spend their lives trying to catch up with what hearing people say. Whether it’s with your family at the diner table, at a meeting in the office, or just walking down the street, those hard-of-hearing are usually left out of conversations. If only there were movie and TV captions in the real world.

Introducing Ava. Ava is a speech to text captioning app that turns the conversations around you into easy to read text. Instead of reading lips and trying to catch up, hard-of-hearing people can now stay on beat with everyone.

Ava’s desktop and mobile app allow you to use it whenever and wherever. Caption lectures, meetings, and discussions automatically. Ava is capable of differentiating who is speaking, so you don’t have to worry about group conversations. When meeting new people, you can also use Ava’s text to speech function to order a coffee or say hello. The individual package comes with a free trial, and runs you $14.95 per month afterwards.

Ava isn’t just for individuals; there’s also healthcare and organization packages. All your employees can now communicate effectively, no matter their hearing level. The healthcare feature saves a transcript to review later or share with those involved with your treatments. This solution allows for a fully accessible workplace to Deaf & hard-of-hearing employees. It’s not just companies, either; make your event fully inclusive with the Ava Venue package. The organizational plans start at $99 per month per license. 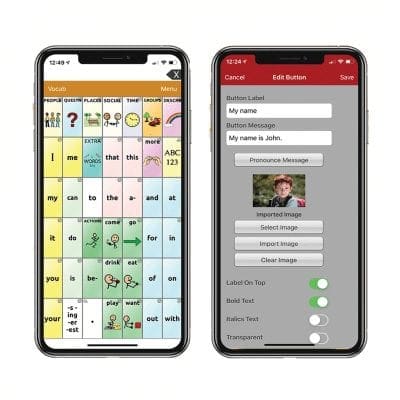 Speaking is one thing that a lot of people take for granted. Those with ALS, cerebral palsy, multiple sclerosis, Parkinson’s disease, and traumatic brain injuries aren’t so lucky. These issues can cause deterioration of mouth muscles, causing the patient to be unable to speak. A Voice generating device, or VGD, can help solve this issue. With a VGD, those who have lost the ability to speak can communicate again through a text-to-speech interface.

One mobile app that allows for Voice Generation in the palm of your hand is TouchChat. TouchChat uses symbols and text on a button-based keyboard to help someone speak. The user has access to customized vocabulary, where they can select images and specific diction for every button. The app also has a LITE version, where you can test the system before purchasing the full product. The LITE version costs $9.99, while the full version with the full feature set is priced at $299.99.

The world of voice technology has changed dramatically for both consumers and healthcare professionals. Developers can utilize tools to integrate voice services into all forms of software. Systems like Merit, Ava, and Touchchat are utilizing Voice Technology to make our daily lives and Healthcare experiences better.

Slingshot is in the process of developing a Voice Technology Healthcare application. It’s called  Dr. Dictate: a surgical voice-dictation app. We expect this product to be completed by Q1 of 2021. Look out for that announcement!

It’s exciting to see how far we’ve come in the last 175 years; remember to wash your hands! Slingshot is excited to see where the next 175 years of healthcare will take us. 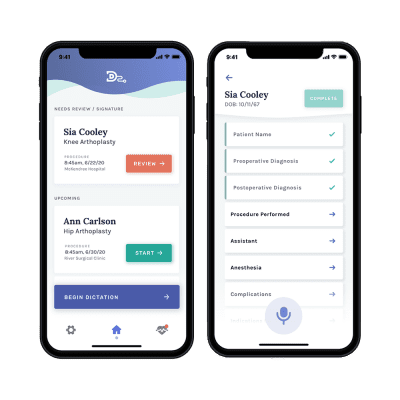